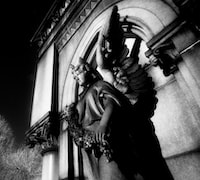 Recitals 3 (2019)
In most live improvisations a player is trying to transcend their instrument – but live concerts for Chuck van Zyl are an attempt to transcend a system of instruments. The double CD Recitals 3 arrives with high expectations and from the start it delights and transports. The live concert, the flickering shadow of the soul is where moment by moment this music was realized – as it is here that Chuck van Zyl uncovers the secret of his own operation.


Disc 1 (71’39”) includes music from live performances for MUSIC WITH SPACE, Johnny Brenda’s and NEEM Fest 2018 and moves from the dolorous to the ecstatic in a balance of opposing tensions. As if upon the workings of some powerful engine the music moves deliberately in sequencer steps rather than abruptly in leaps. A symphony of thought, The Weakening Eye of Day fascinates the mind, captivates the heart, and stimulates the imagination.


Disc 2 (76’05”) features extracts from the abstract passages of five performances, and hopes to bypass the conscious sensibilities for a direct connection to that which is elemental. Notes collide, collude and combine. Each movement comes at you in a ramble of melody, a search of harmony, a flight of timbre. In To the Close and Holy Darkness we hear a unity in the arrangement and the message conveyed.


The music found on Recitals 3 displays the glimmer of imaginative energy that has graced Chuck van Zyl’s music for over 30 years. Conjoining disparate impulses it evokes cycles of collapse and renewal. Gorgeously colored, weighty in theme, style and construction this music reaches into the world of the surreal – in a profound poem of electricity.


Recitals 3 is available through:
Recitals 3 and the three two-CD set Recitals Box are available from Projekt Records
Powered by